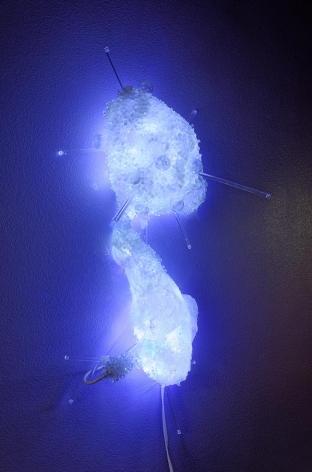 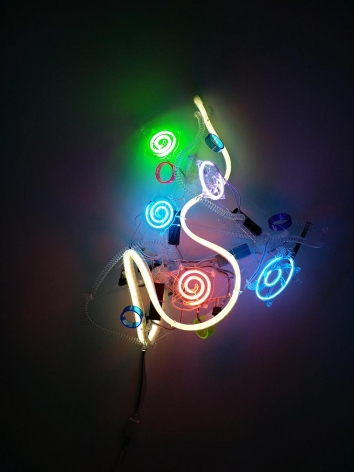 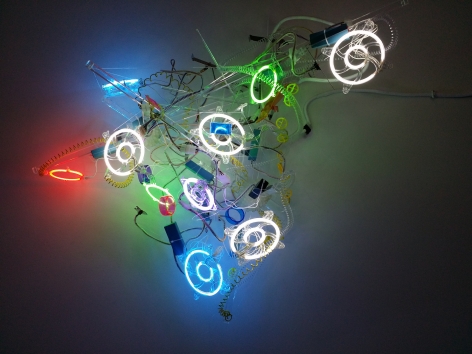 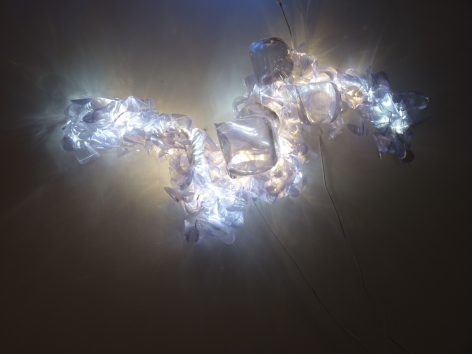 Cris Worley Fine Arts is excited to announce its second solo exhibition with new media artist Adela Andea. Romanian-born Andea is known for her elaborate light installations that create an all-encompassing visual experience for the viewer. The impetus for this exhibition, Zero Degrees Celsius, came from Andea’s recent trip to Alaska. After viewing the momentous glacier formations, Andea was inspired by the hues of white and glowing pastels of the ice and sought to simulate their ancient forms using modern technology.

For this exhibition, Andea continues to experiment with her medium, combining technical materials, such as magnifying lenses, LED lights, flex neon, and power sources, with organic motifs to construct otherworldly forms. Her purpose is to visualize the uncanny relationship man has with technology, a relationship that involves knowledge of the familiar and swift adaptation to ever-changing systems. The vibrant colors and varied textures create a playground for the eyes, allowing them to dance across Andea’s compositions with spontaneity and access the viewer’s personal experiences for interpretation.

Andea currently lives and works in Houston, Texas and received her MFA in 2012 from the University of North Texas in Denton. She exhibits frequently throughout Texas and her work was part of last year’s noted Texas Biennial. Andea’s work has been featured in many art fairs, including Scope Miami, the Dallas Art Fair, Art Miami, and the Houston Fine Art Fair, among others. Andea has also created site-specific installations for the Gensler architecture firm in Houston, the Fashion Industry Gallery in Dallas, and will soon be participating in a group exhibition at the Grace Museum in Abilene, Texas.